The Agricultural Hall is used for family parties, weddings/receptions, horticultural judging schools, exhibitions, card games, fund-raising events, pipe band practices etc., as well as housing all the exhibits at the annual agricultural fair. There is 6,000 sq.ft. of space, perfect for your event.

The first agricultural hall and drill shed was built in 1865 for this was the time of the Fenian Raids. In 1868 the roof fell in from the great weight of snow so the present agricultural hall had to be built the next year. It was built to provide space for exhibits of fruits and vegetables, flowers, grain, baking, canning, sewing and children’s exhibits, as well as commercial displays and refreshment counter and tables.

The cost of the Agricultural hall was $1500 in 1869 and was a structure 100 feet long by 60 feet wide. The timber frame construction with wooden pins  can be seen throughout the building.

Over time several changes have taken place to the halls. The third story was removed due to it’s unsafe condition. Electricity was installed, you can still see some of the old insulators with wires on them if you look up in the ceiling. A kitchen was added to the rear of the building in 1964. Washrooms were built, first in the front of the hall and then moved to the back of the hall in 2000. In 2000 a major overhaul of the facade was completed to bring the build partially back to the original look.

The current structure had the third story removed in the early 1900s. It boast all of the modern conveniences like a kitchen and washroom which were added to the rear of the building in 2000.

The Oldest Covered Grandstand in Canada 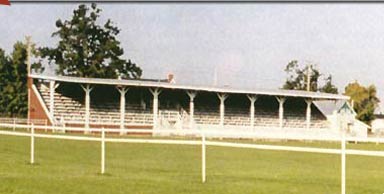 Built in 1868, the grandstand has been used annually from May to October for various events and can seat approximately 650 people. Over the years spectators have used this facility to watch horse races, judging of livestock classes, football, soccer, softball, lacrosse., fireman’s competitions and demolition derbies.

The North Lanark Highland Games have been held on the grounds for over 25 years, and the RCMP Musical Ride has made three appearances.

The truth  about the dinning hall is that it was originally the Poultry Barn. This picture was taken from the 1916 Prize Book and clearly shows the origin of the Dinning Hall. The Dinning Hall sits on  Lot 103 it was built in 1903 for the sum of $805.

The current Horse and  cattle barns where replaced around 1950 . The original horse barn seen in this picture has a centre isle which visitors could walk down.  It is situated in the same position as the current barns.